While everyone is ooohing and aaaahing over the new GD&T standard released in April, there is a rule that dates back to 1994 that very few people know about. And although it’s not something that would be used very often, it’s something that might be worth filing in the back of your brain…

This little-known rule is the idea that the variable tolerance created by an MMC or LMC modifier — often called “bonus tolerance” — can have a limit placed on it. Most GD&T people are comfortable with the notion of bonus tolerance, but recall that the maximum amount of bonus is completely dependent on the tolerance allowed for size.  Here’s an example: 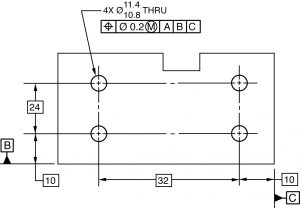 Now suppose that the designer wants to allow extra position tolerance with the MMC modifier, but for some reason can’t let it grow to 0.8. (Maybe there is concern about having a hole drift too close to the edge of the part.) Then the standard allows for the feature control frame to state a maximum tolerance value, thus placing a cap on the bonus tolerance:

I mentioned this trick on another GD&T discussion forum recently, and most of the folks who are regulars there hadn’t heard of it. So just think of it as another tool in your design toolbox, even if it is rarely used. If you have a copy of the ASME standard, check out Figure 6-42 in the 1994 edition, or Figure 6-15 in the 2009 edition for their examples of this.

As always, your comments are welcome!